Gracemere was the domain of Archers & Co from 1855. After "The Canoona Gold Rush" (66 days of Canoona), some of the remaining diggers found employment with the Archers.

As the population increased the first licenses were issued to Gracemere storekeepers on April 9th 1859 to: John Woods, Fitzroy Milne, Jerimiah Canty, James Carney and on the 3rd of May to James Anderson. In October of 1859, Mr Craises of Rockhampton, one of the New South Wales Government appointed storekeepers to the Canoona Rush, saw the 'potential and the profitably' of a hotel in this area. He proceeded to build an "Inn" on Archers Creek (Nerracol/Scrubby Creek) and the road that crossed this creek (Archers Road). It passed through the Archers Lease and was strongly objected to by Colin Archer of Archer and Co: 'on the grounds that the workings of his property would be seriously disadvantaged because his workers would always be intoxicated.' Because of this 'objection', this Inn was never completed.

By 1862, with the ever increasing 'traffic' that passed to and from the Archers homestead on the way to and from the Dawson, Archer and Co reversed their previous decision and they built a hotel on their property; on top of the hill on the corner of the Gracemere Towns' road of Holland and McLaughlin Streets that bordered the leased part of their land. In 2006 - O'Shaunassy's Motel was demolished.

The builder of the hotel for the Archer's, was Edward McKenzie Scott. He came to Australia on the vessel "Rannelees" in 1854, and came to Rockhampton by the "Boomerang' on the 22nd September 1858, to build the house in Rockhampton of Mr. W. H. Wiseman, then Commissioner of Lands. Scott built the Gracemere Hotel with 'three sitting rooms and eight bedrooms'. He was licensee from 9th October 1862 to 11th October 1865. History tells us that the Bushranger Frank Gardiner passed through Central Queensland. He was born Frank Christie alias Clark and Gardiner, and he camped at Scrubby Creek; where Kabra is today, with his paramour Ms. Catherine Brown. The horse that was pulling their dray was called 'Darkie'. 'Darkie' was in fact, a black, sleek and celebrated thoroughbred racehorse. Gardiner had stolen him from Magistrate Peter Beveridge who lived in Swan Hill, Victoria. After Gardiner was arrested and charged, Darkie was returned south on the same vessel that exiled Gardiner.

Mr. Scott, in his reminiscences claims: "He (Gardiner), was the nicest man I ever saw in my life. He used to have his meals at my place, though he never slept there. He had a camp down below the waterholes. I was out when he first came to my place; but I remember my wife telling me how, when he went to buy some things he took some notes from a roll as thick as a ginger beer bottle.Was this part of the 'winnings' from his rides in the Rockhampton Race Meeting on the 22nd July 1863 when he rode in the Trial Stakes, riding Mr. J. Hunter's 'Pellester' - rider Clark.

This hotel was also known to be favoured by others of the 'horsy set'. They would ride to Mr Scott's 'Gracemere Hotel' to 'sample his liquors'. The Rockhampton Show was 'born' in this hotel on the 22nd June 1874. Several public-spirited men from Rockhampton and Gracemere held a meetin and formed the 'Central Queensland Grazier's and Farmers Society'. The first Gracemere Show was held six weeks later on the 4th August 1874 in Archer's paddock behind the hotel. The hotel traded through to May 1875.

Gracemere Hotel 2 was built 10 years later. This hotel was built on the opposite corner to the first hotel, so named: in the obscure piece of freehold land surrounded by McLaughlin and O'Shannassy Streets on Gracemere's borders. The owner/builder was John Rutherford one of the 'horse breeding and racing Rutherford's' of Rockhampton.

Digressing for a moment - in the year prior to the building of this hotel and recorded in the newspaper of the day, John Rutherford arranged Rockhampton's second trotting match. The horses were to trot in harness from the bridge in William Street opposite the Rockhampton Show Grounds, to the crown of the hill at Gracemere, a distance of about 6 miles. Each owner was to appoint a referee to ride in the rival's buggies to see that the trotting was 'fair and square' and IF the animal broke into a canter, it was to be pulled up to a walk within fifty yards. The match was to be run in three heats over two days. The first of the two heats on day one was run at 5pm between, Laiety's 'Jew Boy', Sheehy's 'Stock' and Shaw's 'Top' (winner). Fifteen minutes later Morgan's 'Goldfinger' ran, 'Top' winning by a length and a half, in the time of 25½ minutes.

At the time of this race, John Rutherford may have been planning to build a hotel, because he had applied for a provisional license, of the 'house [that] wasn't built', on the 19th March 1885. It was to contain 'three sitting rooms and seven bedrooms'. Rutherford did eventually build and became licensee on the 9th June 1885, although the stables weren't completed. By July 1885 a local correspondent writes, 'The Hotel on Mr. J. Rutherford's property at the junction of the cross-roads, adds a lively appearance to our little town.' By 1913 the Dining Room of this hotel was used as a meeting place of the Residents Association, Shire Council, the Progress Association and by anybody that wanted to express an opinion.

Most of the early 'hotel stories' that are passed down through the pages of time, are about, 'licensee's who are their own best customers', and have died because of it. The licensee, in this case, was Mrs Sarah Hyland. She got the license of this hotel after the previous owner, her husband John, died. She held this license from the 16th June 1888 to 31st October 1889. During this time she also held the license for the Gracemere Slaughter Yards. In one of the consignments of hides she had for sale was the hide with the brand EOF. This hide was from a bullock stolen from Patrick Joseph McLaughlin, the brother of Thomas McLaughlin of the Fitzroy Brewery. Sarah was convicted and although she had a previous conviction for the same offence, the charge was quashed by a technicality in the Court case that ensued.

August 1931 and this hotel was the first building in Gracemere to have electricity; the lights for the rest of the Gracemere Township would be switched on in the following week. The Gracemere Hotel continues to be licensed through to this day and has had 59 licensees to 2007. 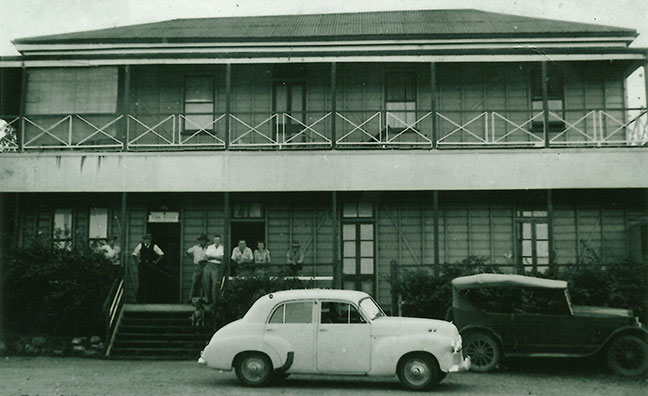 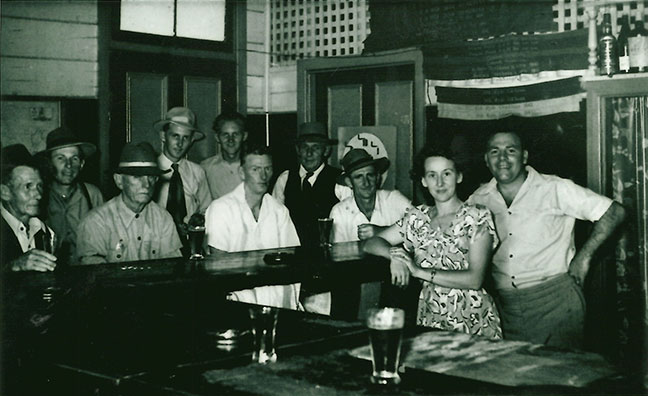 Today in 2010 patrons can enjoy the country atmosphere with a combination of the original building and finishes complimented by the newly refurbished restaurant extension to the original hotel. The Gracemere Hotel still to this day 'adds a lively appearance to our little town' as it did back in 1885.

Our Courtesy Bus is operating from 4:30pm until late Tuesday to Saturday! We will happily pick you up from your home if you live in the Gracemere area, or we can arrange for group pickups outside Gracemere, then we'll take you home when you’re done!